And don’t bump into the furniture

“Ah, good old Cyril. He’s a delightful chap. Such a shame about his memory problems.”

As skewering of rivals go, it was the most effortlessly effective I’ve heard. A singer referring to a colleague of advancing years, getting right behind him, as one needs to do before stabbing someone in the back.

You see, there’s no comeback is there? You could cast aspersions on a rival’s singing, but people can hear for themselves and reach their own conclusions. You could belittle his acting ability, but again they can judge that too, it’s highly subjective anyway, and frankly even if true has hardly been a career-ender for a lot of singers. But as soon as there’s a question mark over the memory… well, even the slightest slips become signs of an irreversible decline.

It’s not that memorisation is the most important skill in a singer’s armoury, but its absence is a pretty-much-insurmountable obstacle to a career in opera. It is infinitely more important than the ability to sight-sing, and significantly more important than the ability to read music (or words for that matter). Those things can be got around, as can wooden acting or movement issues, assuming that the end product is worth it. But a bad memory is probably a deal-breaker, especially in this era where a prompter, while not unheard of, is highly unusual and taken to be a sign of a serious malfunction somewhere along the line.

And yet, along with many other vital professional skills,  the process of memorisation is barely touched upon at music colleges. It was referred to once when I was training, in a class where the professor suggested I try singing without copy. I said I hadn’t memorised the piece (and in fact was preparing to sing it with score in concert). She said have a go – you might surprise yourself. So I did, and I didn’t. The idea of knowing something by heart without being aware of it struck me as very odd at the time (as now) – I’m pretty sure I’ve never learned anything by accident.

I’m not really here to talk about memorisation though. It’s just that it’s on my mind, to the near-exclusion of everything else, because this is Ring rehearsal week 0 – which is to say, 7 days to go, 77,000* words still to be memorised.

I’m not going to bang on about word-learning, since it’s the most mind-numbing, soul-destroying process ever. One day I might attempt to write something which will help young singers to grasp some useful skills when it comes to approaching the process of committing a role to memory, which is to assume that Wagner doesn’t finish me off in the meantime.

For now, let’s take a look at how The Master might have helped us a little bit here and there, even though he caused the problem in the first place. Here’s Wotan giving his daughters the sharp end of his tongue in Act 3 of Die Walküre: 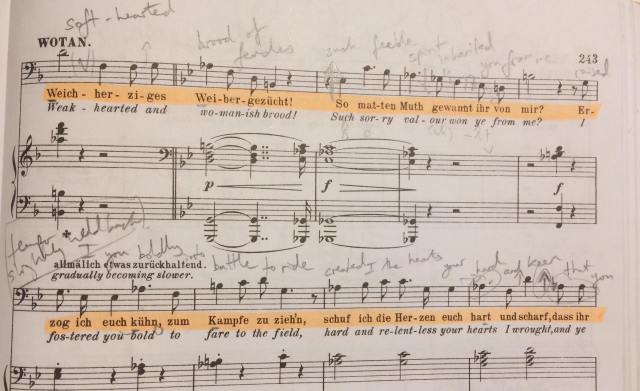 And here he is in Act 3 of Siegfried making small talk with his eponymous grandson: 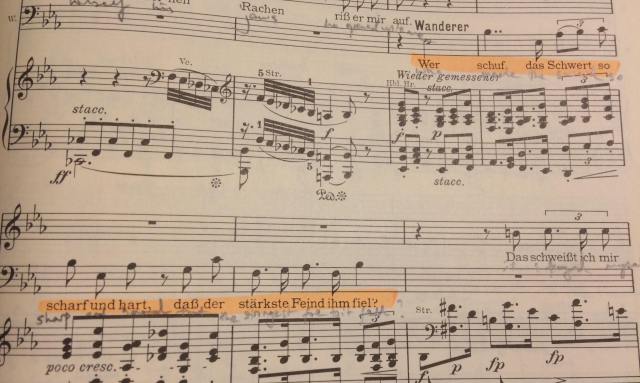 Now, you’ve no doubt already spotted the memorisation problem here – is it hart und scharf this time, or scharf und hart? And why couldn’t he do us a favour and stick to some sort of consistent order?

Let’s look closer and get into Wagner’s head – and more importantly his ear – a little bit. Wagner the poet gets a lot of stick, not least for his E J Thribb-like alliteration, but there’s often reason to his rhymes, and at the very least aides-memoire for his long-suffering singers.

You’ll no doubt be way ahead of me here – in the first extract it’s “hart und scharf” because it follows “Herzen”, and the second is “scharf und hart” since it matches with “Schwert”. Hooray for us and no excuse for not getting it right from now on.

But let’s not stop there. Look again at that first sentence – here it is with some of the consonants capitalised for your consideration:

Alright I got a bit carried away there, but you get the idea – this isn’t just straightforward alliteration, but a quasi-structured pattern of consonants. (Bear in mind too that in theatrical German e.g. the G in “erzog” sounds like a K, Z sounds as TS, etc.) It doesn’t quite conform to any particular set of rules – the author saw himself, after all, as von Stolzing not Beckmesser – but the consonant groupings are no coincidence.

Any reader who ever took classes in Welsh literature will recognise the similarity to what we call cynghanedd – literally “harmony” or “chiming” – a major part of which involves patterns of corresponding consonants, usually according to fiendish rules, the complexity of which is crucial to producing the uniquely flowing sound of Welsh poetry**, as well as giving us an excuse to indulge in our national pastime of arguing amongst ourselves.

In fact, anyone seeking an insight into how a meeting of a guild of Meistersinger might have looked and sounded could do a lot worse than pop down to the National Eisteddfod in Cardiff Bay this week and sit in on the Ymryson y Beirdd (“Contest of the Bards” – also sometimes called Talwrn y Beirdd) – the attention to detail, controversy and debate, not to mention the resulting outstanding works of literature, are surely not a million miles from the corresponding events in 16th-Century Nuremberg.

I’ll leave you to carry out the same exercise on the second excerpt. It’s no coincidence, either, that the highlighted consonants are by-and-large the most significant in that section, and are the ones that coaches and conductors will harangue their singers about emphasising.

And yet they’ll also want a classic legato line in the singing, assuming they have a good sense of Wagnerian style. That was Wagner’s own desire – exceptionally clear consonants combined with an authentic bel canto legato. And here’s why some singers speak of Wagner as Superman looks at Kryptonite. If a singer has been brought up with the idea that legato singing is just about vowels, and that consonants should be kept to a minimum, if not dispensed with altogether, then Wagner’s demands will test their technique to breaking point and beyond. Either the clarity of the text will be lacking, or the line of the legato will be broken in an attempt to make larger consonants, somehow independently of the actual singing (often resulting in the notorious “Bayreuth Bark”).

Coming back to the Eisteddfod, if you’ve grown up singing in Welsh you have a head start here. In terms of how the language itself functions – the relationship between vowels and consonants – Welsh is probably closer to German than most other European languages, and more than that, the approach to the importance of language, words and poetry in song in traditional Welsh singing corresponds very strongly to Wagner’s attitude.

Plus we start them young. When I adjudicate at local Eisteddfods I often begin the day with the 4-6 year old category, and while the musical standard of the singing can be slightly idiosyncratic at times, I can’t remember a single instance where words – in terms of diction and meaning – weren’t crystal clear.

Here’s Bryn Terfel singing Gwynfyd*** by Meirion Williams, with that very same clarity of diction and meaning. This was recorded when he was a mere 27 years old – but bear in mind by that time he’d been doing it this way for a quarter of a century. And the skills, as he has demonstrated, are unquestionably transferrable to Wagner. 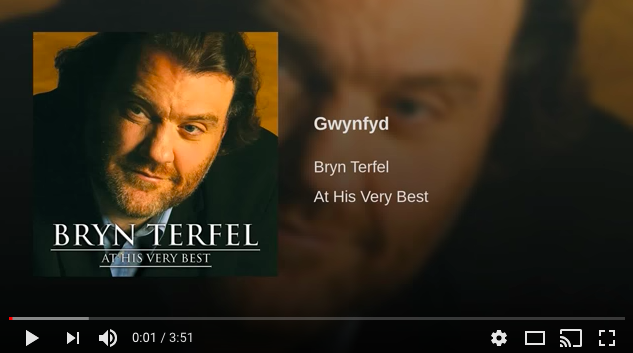 I had a great ending lined up which would tie all of this together most elegantly, but I’m damned if I can remember what it was.

** for examples of cynghanedd in English language poetry see some of the works of Gerard Manley Hopkins, and also more loosely Dylan Thomas.

*** I don’t think there’s any strict cynghanedd in the text – although I’m happy to be corrected on that – but the flavour of it is certainly there.

Paul Carey Jones is a Welsh opera singer. He should be writing about the current state of the classical music business but might well digress into science, politics, football or cheese. You can contact him via comments here or at: paulcareyjones@gmail.com
View all posts by Paul Carey Jones →
This entry was posted in acting, Music, Opera, singing, Theatre, Wagner, Wales, What they don't teach you at music college and tagged classical music, music, opera, singing, Wagner, wotan. Bookmark the permalink.